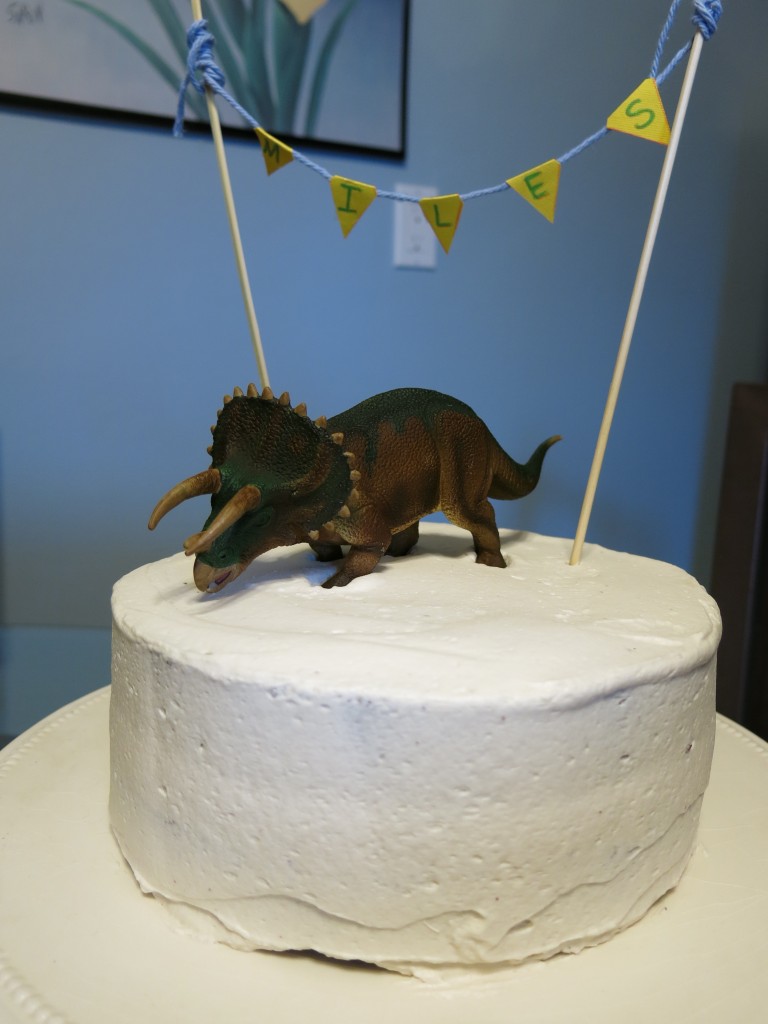 Somehow my youngest just turned 3 years old the the other day.  Everything about his birthday had to involve dinosaurs. From the decorations, the presents, his clothes and even his cake. He is ridiculously and adorably obsessed. He really wanted his party to take place at the local Dinosaur Park, yes there really is one, but we will do that trip on a later date. His party took place on our deck for about 10 minutes and then due to torrential rain we moved it into our basement.

He went back and forth on what type of cake he wanted. First it was just vanilla. Then chocolate. Then both and at last a dinosaur cake. I went with “both and dinosaur cake. I made a basic 2 layer chocolate cake using a recipe from the cookbook: Have Your Cake and Vegan Too by Kris Holechek from the nomnomnom blog. The frosting I threw together myself. Just the usual Earth Balance, powdered sugar, vanilla..etc..frosting. After frosting the cake I plopped on his favorite dinosaur and made a quick banner to make it a touch more festive.

The cake itself was amazing. So moist and incredibly delicious. I took a risk by making a recipe I never made before and it paid off. A week later some non vegan guests were still raving about this cake! This is my new go to chocolate cake recipe and it should be yours as well.

Most importantly the birthday boy was so happy with it. There was a dinosaur on it! So thrilling to a 3 year old!  My birthday is coming up next and I will be making my own cake. This one! Maybe with a dinosaur on it.