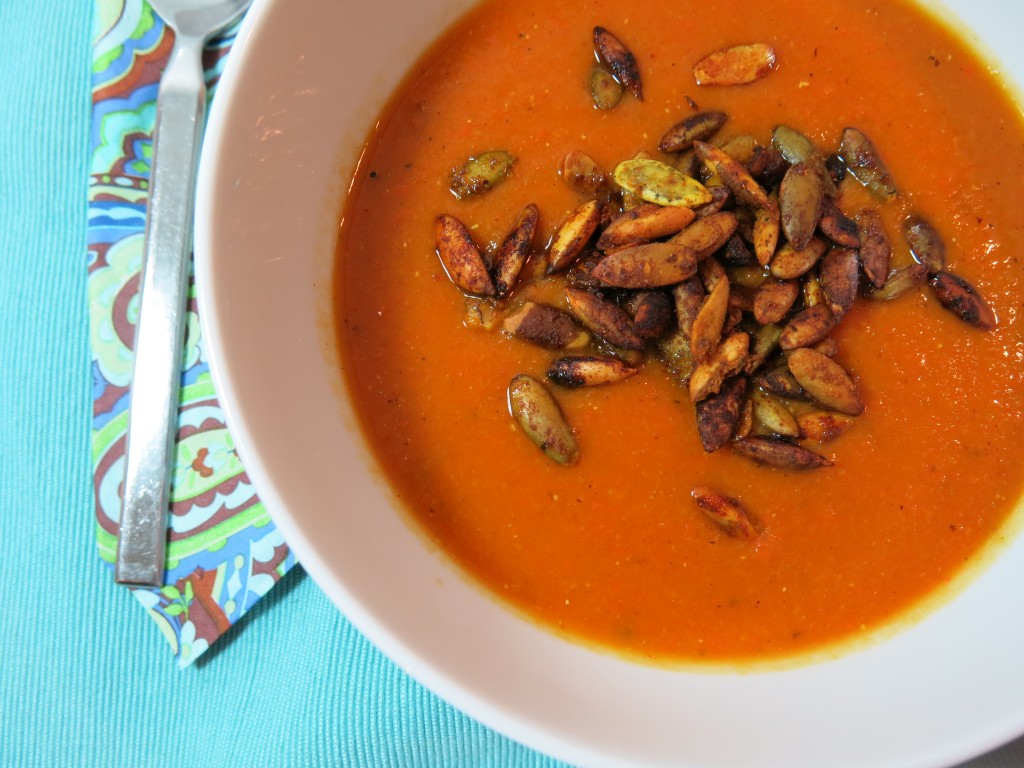 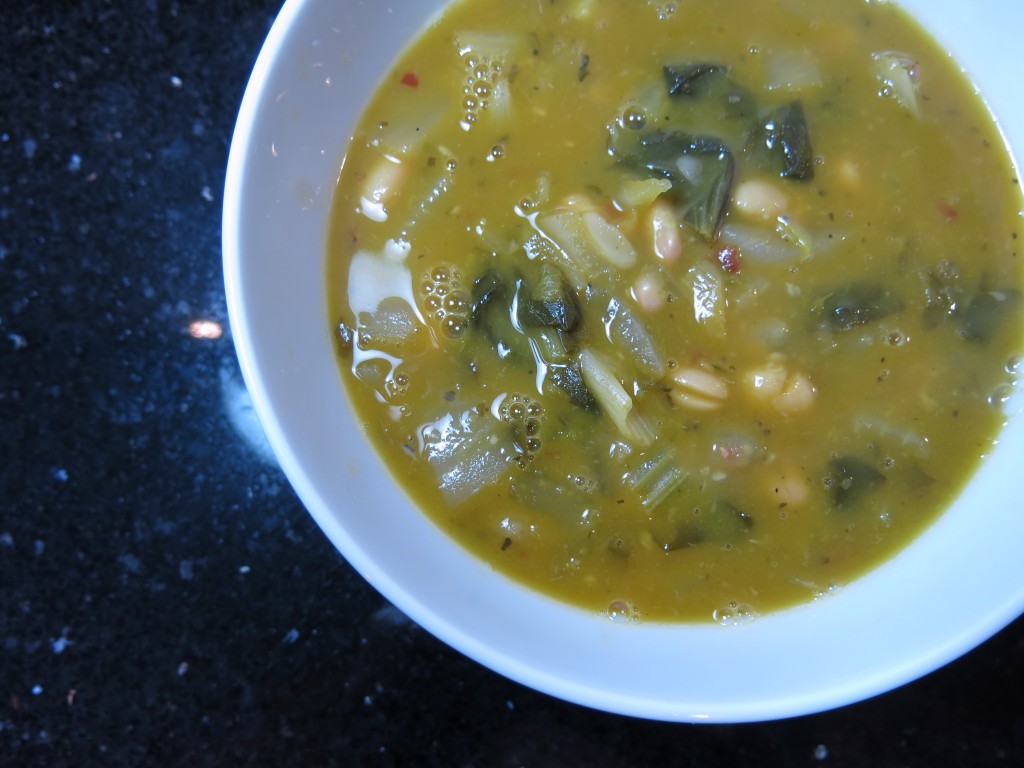 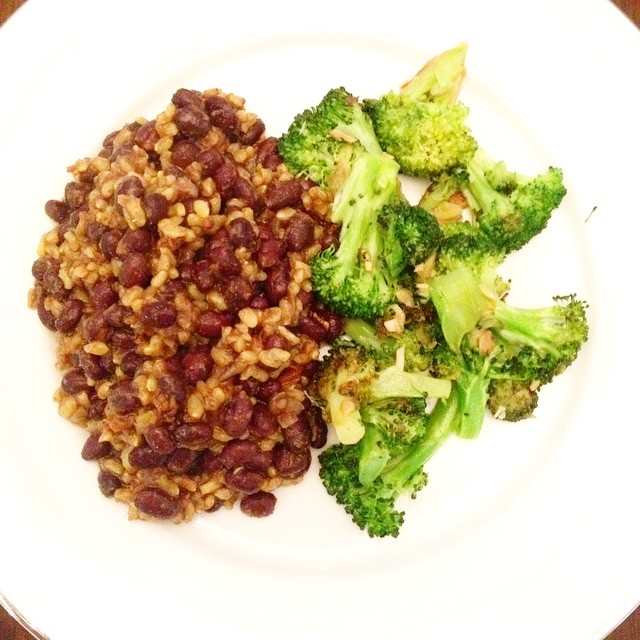 Rice and Beans with Garlicky Broccoli

We are Rice and Bean fanatics. Its a weekly sometimes twice weekly meal for us. It helps that the kids, mostly, like it. With that it’s a good vehicle to hide veggies in. I usually finely grate carrots and zucchini into the beans and add some cherry tomatoes that pop and melt themselves into the beans. The kids are clueless. Its wonderful. 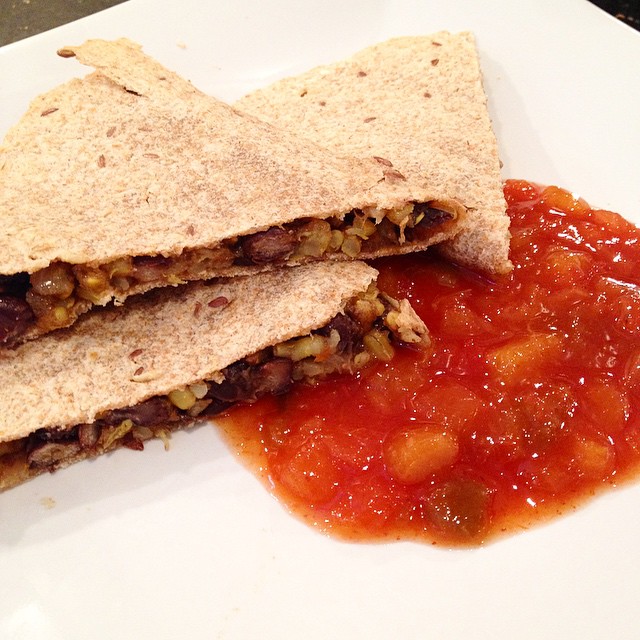 A quick lunch the next day with reheated rice and beans pressed into a whole grain tortilla. Served with a peach salsa from Trader Joe’s. It was very refreshing for a snowy day. 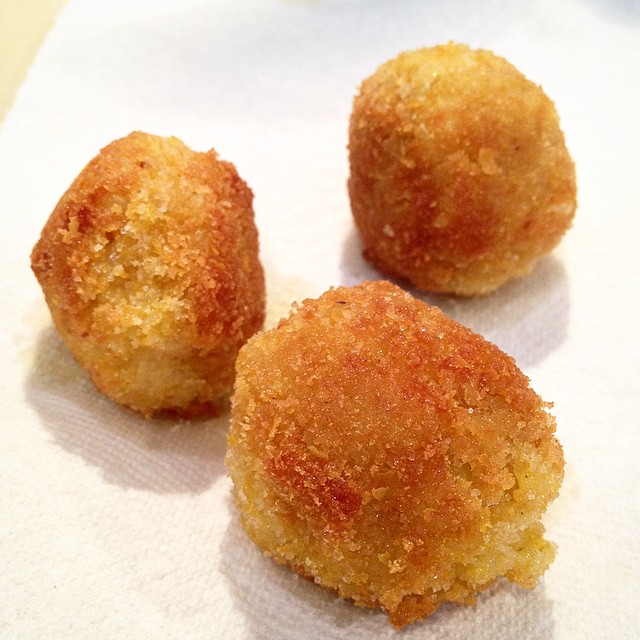 This time I made a double batch of my Yellow Brown Rice. I cook the rice in rich chickenless broth and turmeric. Its so savory and delicious. I was going to use the extra rice for another meal a day or two later when a fabulous idea popped into my head: ARANCINI!!! This batch of rice was a bit sticky which is perfect for making the Italian treat. Its something I’ve been thinking about trying to make for ages now. We just never have extra rice or risotto laying around.

I formed the rice into walnut sized balls, dipped them in unsweetened almond milk and then rolled them in mixture of bread crumbs and nutritional yeast. Fried them in olive oil and sprinkled them with salt. They were fabulous even though they were made with brown rice. They are usually made with a risotto or similar type of rice and sometimes stuffed with a meat filling or mozzarella cheese. I was really surprised how well these worked out and how delicious and simple they were. My mom was even impressed! This is definitely a recipe I’ll be fine tuning over the next month. I want to eat them all the time with various fillings! 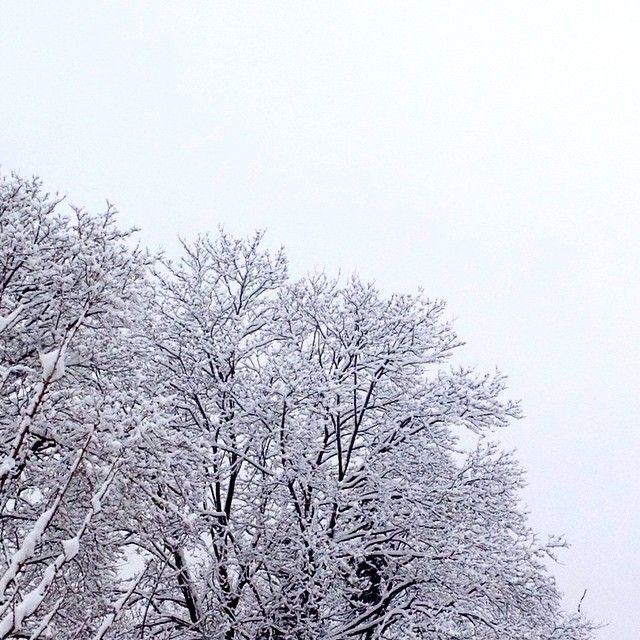 Not a photo of the blizzard

The northeast, where I live, is bracing itself for an epic Blizzard this Monday afternoon through Tuesday evening. The amount of snow in the forecast is insane. The amount of robocalls, texts and emails I’ve received from the town I live in and the school(s) my kids go to is also crazy. I’m just happy that we went food shopping yesterday just to get out of the house from the tiny 4 inch snow “storm” we had the night before, pictured above. I have to say though I’m kinda excited too see as much snow as they are predicting. If it’s less then a foot and a half of snow I’ll be disappointed. As long as we are safe and warm I want it to snow. A lot. 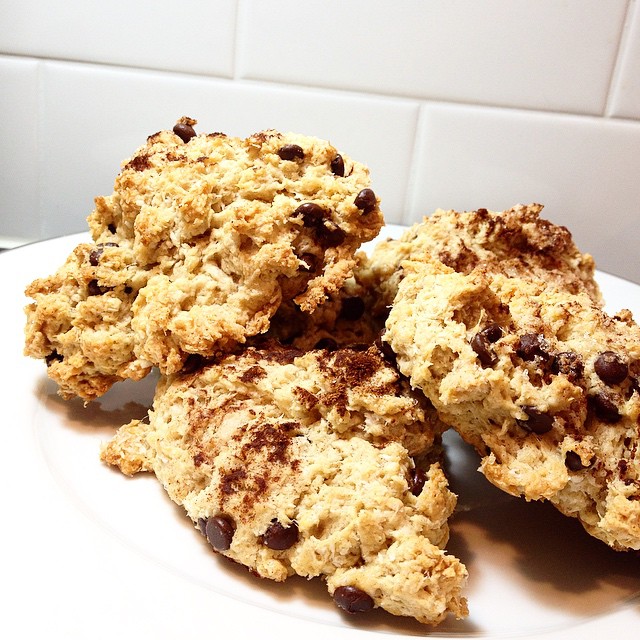 With the snow that fell a few days ago. My husband and kids were outside shoveling and cleaning off the cars. I was busy fixing myself a delicious Cold Brewed Coffee while enjoying the warmth from being inside. Thinking that was a bit unfair while my husband, preschool aged son, and second grade aged daughter were outside cleaning off my car and shoveling out the driveway I thought I would treat them. I made our traditional snowy day treat. Chocolate Chip-Coconut Scones w. Cinnamon Sugar or as we call them Blizzard Scones. For some reason I tend to only make them when there has been some type of snow event hence their nickname.

Its a wonderful feeling having your family come inside from the cold, working their little butts off and wondering what smells so good. There glee after realizing that I made our favorite scones is just great. They couldn’t wait to eat them!

This time around, making the recipe, I switched the earth balance I usually use with cold coconut oil. Its what I had around and I alway’s wanted them to have an extra coconut flavor to enhance the coconut flakes in the scone. I love how them came out with this change. The outside of the scone was crispy and slightly crunchy while the inside was soft and warm. They were perfect! I have a feeling I’ll be making these again this Tuesday morning. :)

Chocolate Chip-Coconut Scones
2015-01-25 19:58:51
My families favorite treat on a snowy morning. If you don't have coconut oil feel free to use your favorite vegan margarine.
Write a review
Save Recipe
Print
Ingredients
Instructions
Notes
By Jenna at good-good-things.com
good good things http://good-good-things.com/ 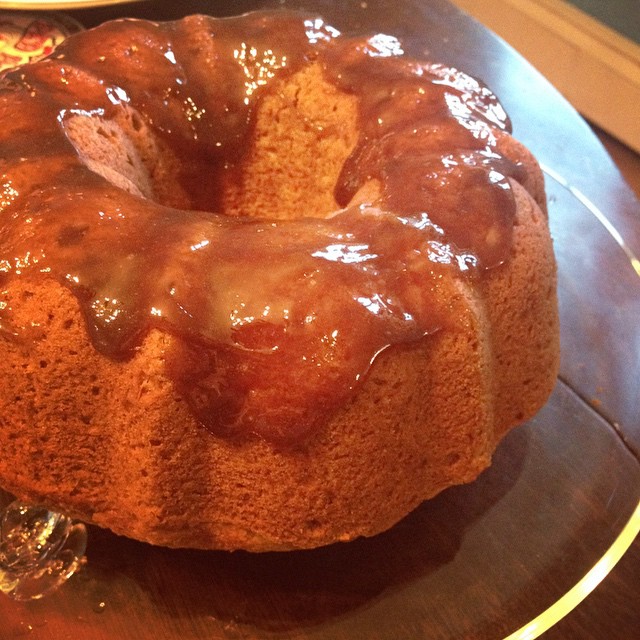 The New Year is already 3 weeks in and moving fast. I alway’s hope for a quiet January but that never seems to happen. Its been busy but a lot of fun. That seems to be my theme for 2015:

So far this year I’ve:

~ created a new cake recipe. It was so good! (pictured above)
~ actually created a few new recipes.
~ been invited to not 1 but 2 Food Swaps! Vegan food swaps at that!
~ had a lovely date with my 7 year old daughter in NYC to see Wicked on Broadway. That     was so much fun! If you live in the NYC area follow Kids Free on Broadway. Its such a great deal to see a Broadway show.
~ joined a Win to Lose program at my gym (YMCA). I’m there almost every day now and am already seeing results on the scale. Its very exciting and I feel great.

Fun things that are coming up this year:

~ Vida Vegan Con in Austin, TX! I cannot wait! I’ll be traveling with my friend Dianne from Dianne’s Vegan Kitchen again. The last VVC, in Portland, OR was so much fun.
~ 2 family vacations planned. Our usual Ocean Grove trip and a possible trip to the Outer Banks with my parents and sister.
~ my sister surprised me yesterday with tickets to see the cast of Bob’s Burgers live in NYC this March. I was freaking out. I don’t usually get excited about tv shows but that show is just my favorite thing ever.
~ in 2 weeks I’ll be seeing Isa Chandra Moskowitz live and on stage at City Winery in NYC with my husband and Dianne and her husband eating a delicious Isa meal while she shares stories with the audience.

That’s it’s for now, I think. I have a few other exciting things in the works.

My New Year blogging resolution is as alway’s to start blogging more. I never seem to stick with it though :) Both of my kids are in school 5 days a week now so maybe this is the year I stick with it! Bloggers with young kids…how do you do it??

I hope everyone has a fantastic 2015! Let me know if any of you are heading to VVC in Austin at the end of May! 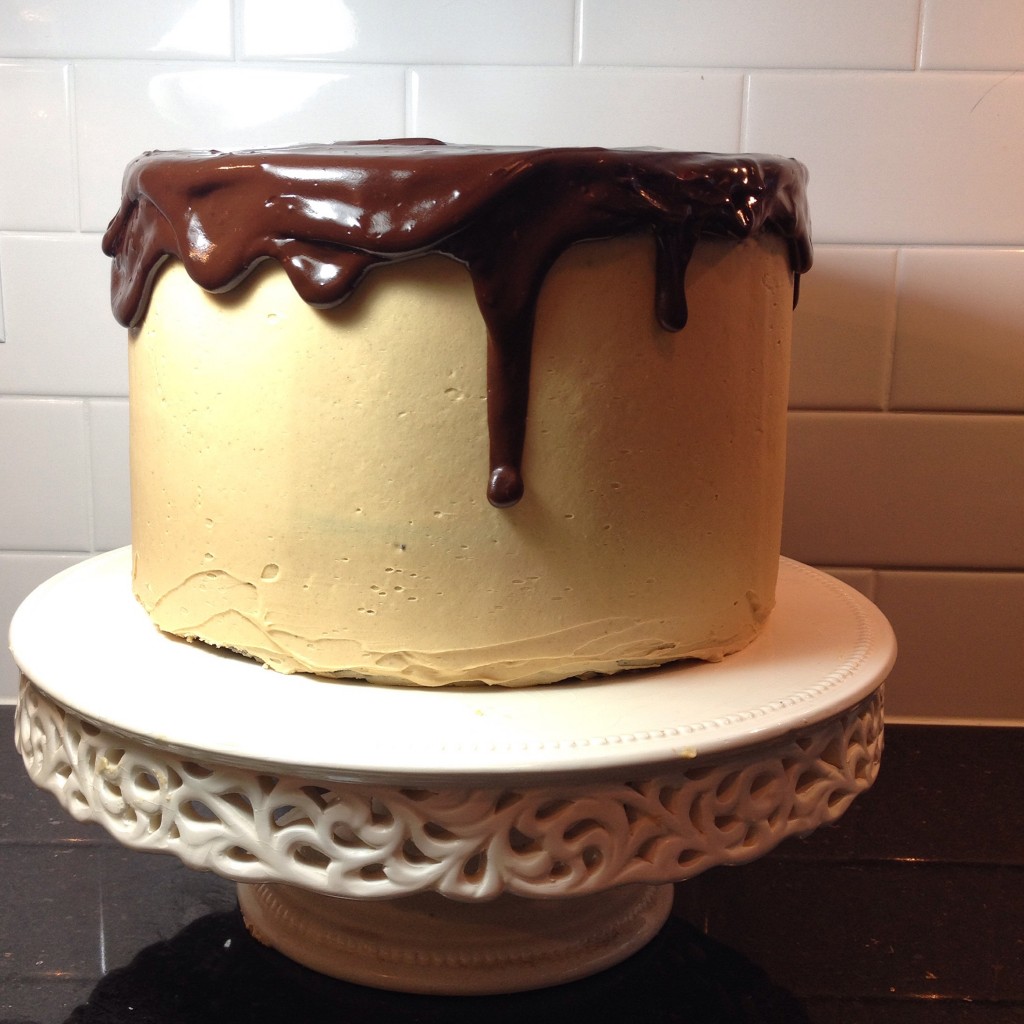 I am so excited to share this cake with you today!

It was my husband birthday, this past weekend, and we decided to have friends over instead of doing a restaurant meal. Its so hard to talk to everyone when sitting at a long table. This was much better. Everyone was able to chat and move around the house. The kids were there and other friends were able to bring their little one. It was all good.

I made all the food, which was a lot of work, but worth it.

We started with Somer’s Kick Ace Extra Sharp Raw Vegan Holiday Cheddar Cheese Ball. For a party full of omnivores this Cheese Ball disappeared! Also out for appetizers was a hummus plate with olives and pretzels and a bowl of mixed nuts. Simple.

For dinner I made a Tomato and Roasted Eggplant Stew with Chickpeas from Veganomicon and Balsamic Roasted Tofu with Kale and Sun Dried Tomatoes by Melomeals.

I didn’t have time to take pictures of any of the food because I was too busy taking pictures of the cake I made. I’m so very proud of it. 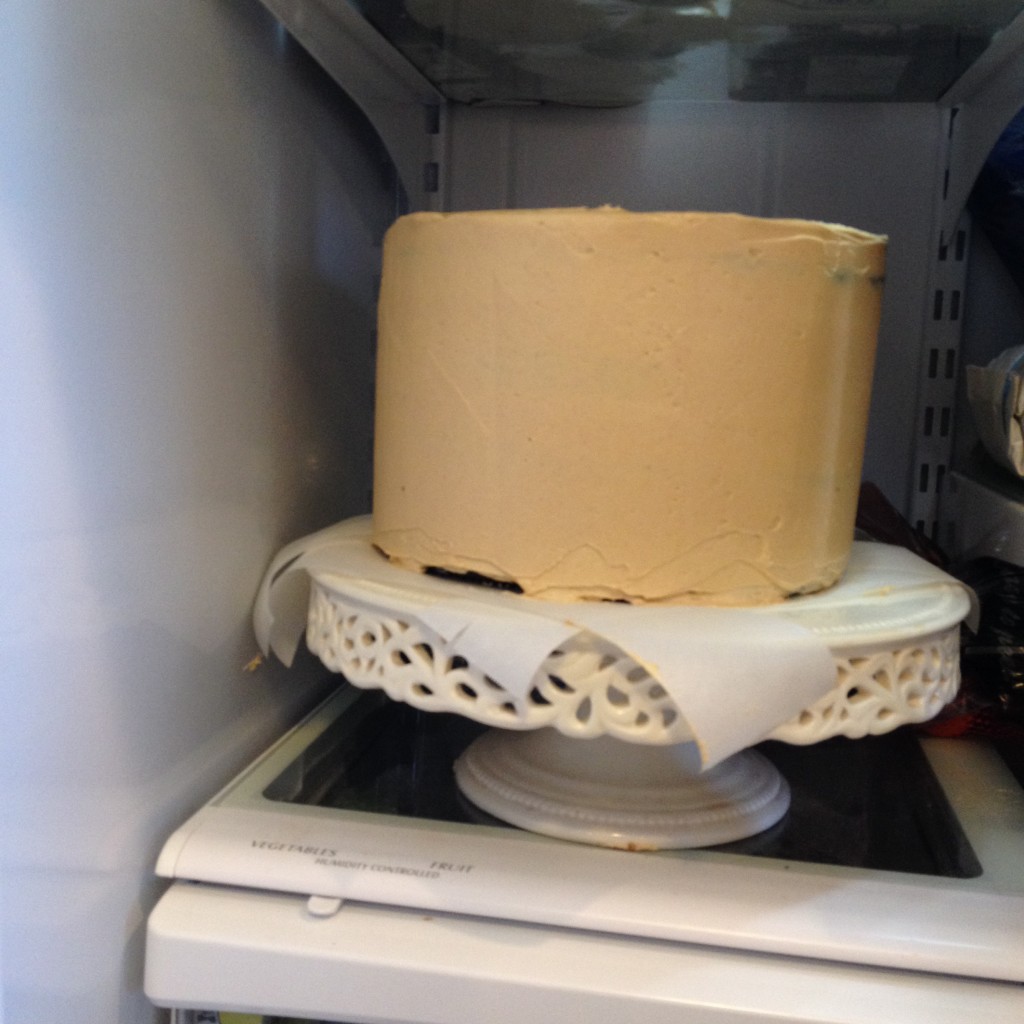 I made all 4- 9″ chocolate cake layers the day before the party. The morning of the party I whipped up a ton of peanut butter buttercream. I though for sure I was going to have a lot of buttercream left over for another dessert but no. Not a drop was left and I’m not someone who loads on a ton of frosting. A few hours before the party I made a quick and thick chocolate ganache and poured it over the chilled cake. Chilling the cake helped the ganache harden while dripping so it didn’t pool on the bottom of the cake. I really wanted most of the ganache still on the top of the cake with some drips down the side. I’m really pleased with how the drips turned out!

The cake was almost 7 inches high and I swear it weighed more then my 3 year old son. I had to take a shelf out of our fridge to store it in there. 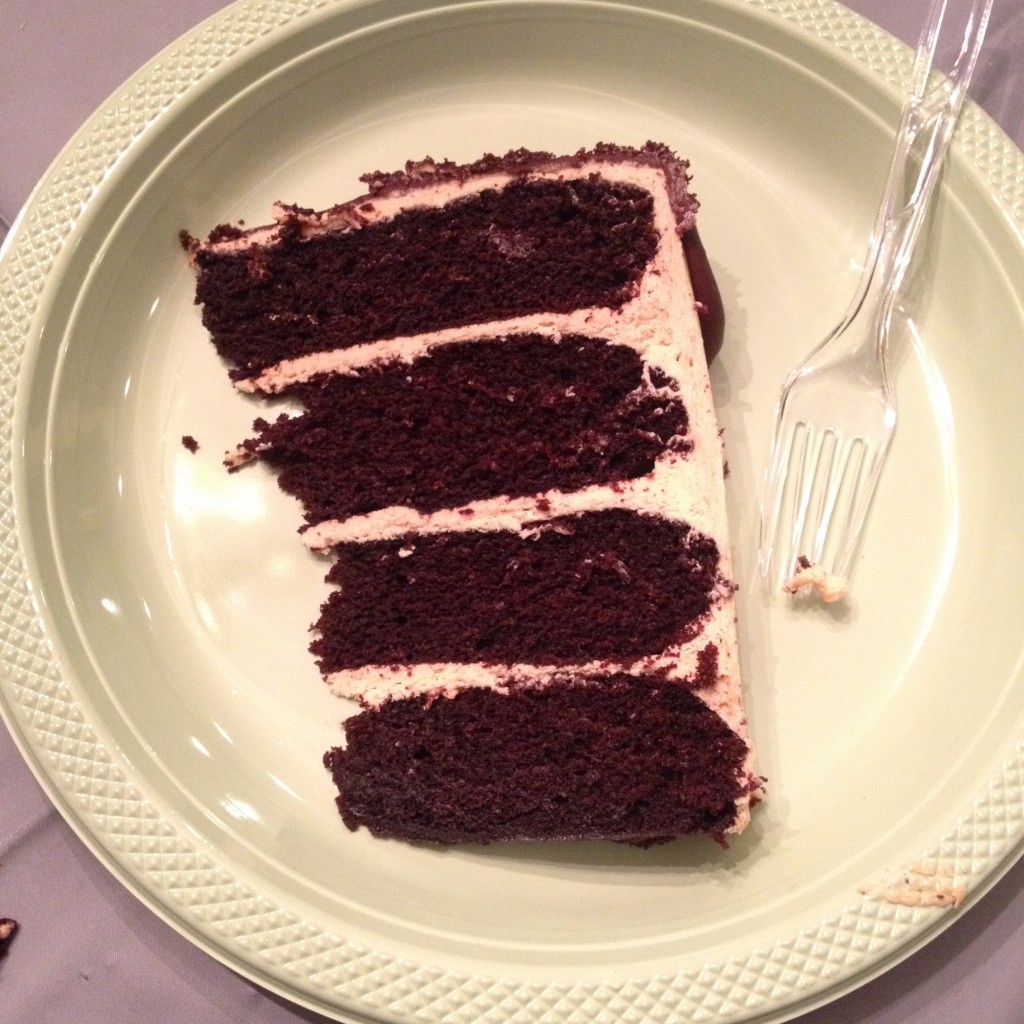 It was all worth it though. It was delicious and everyone was happy to eat it. In fact we are still eating it! With 15 people over we still had half a cake left. A really thin slice of this cake is more then enough. It could easily feed 25 people, I think.