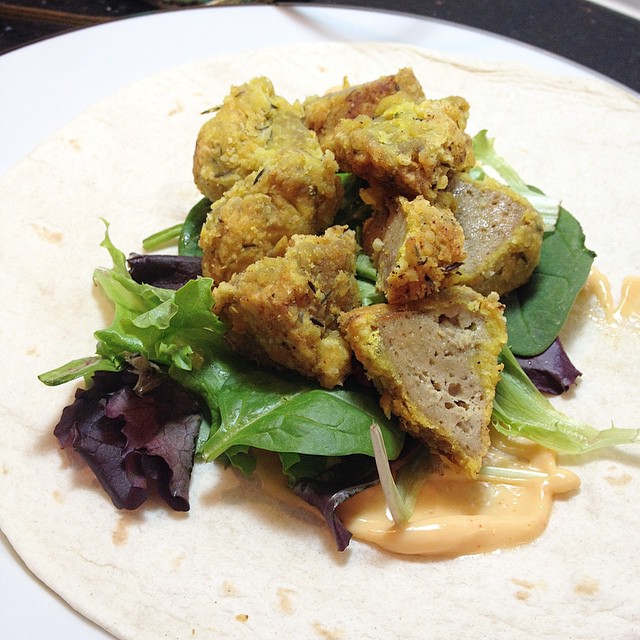 We are home, yet again, with another snowstorm. Spring is only 15 days away and I can’t imagine ever seeing my neighborhood without snow again! Its gotten to a point where there isn’t any place else to shovel it. I feel bad for the people up in and near Boston. They have it way worse then us. I love the snow and love that it is snowing but it’s getting to the point where enough is enough. 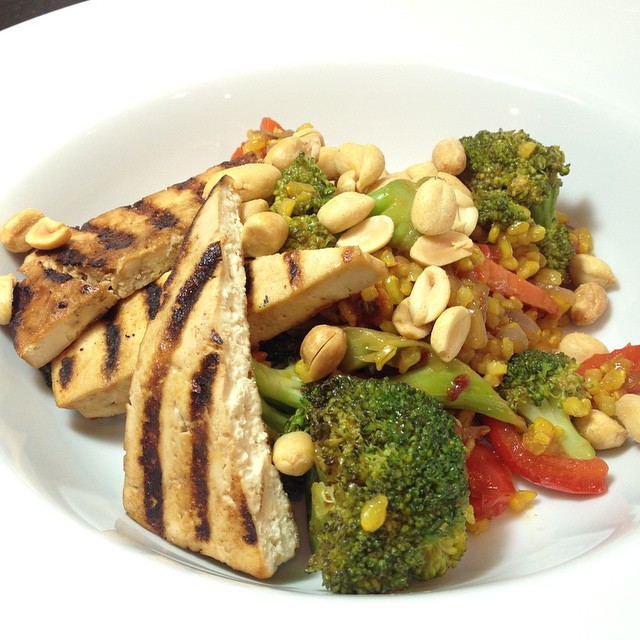 Since the kids and I are home today I’m thinking of trying out some new recipes. Turn the oven on and make the house cozy warm. A few months ago I started working on a Spinach-Cheddar Biscuit. They would be so comforting to make and eat today. I’m thinking up an enchilada recipe or possibly a stuffed sweet potato recipe. Maybe I should combine both ideas? My 7 year old daughter wants to learn to bake so I though we could create a cookie recipe today with whatever is in the baking cabinet. 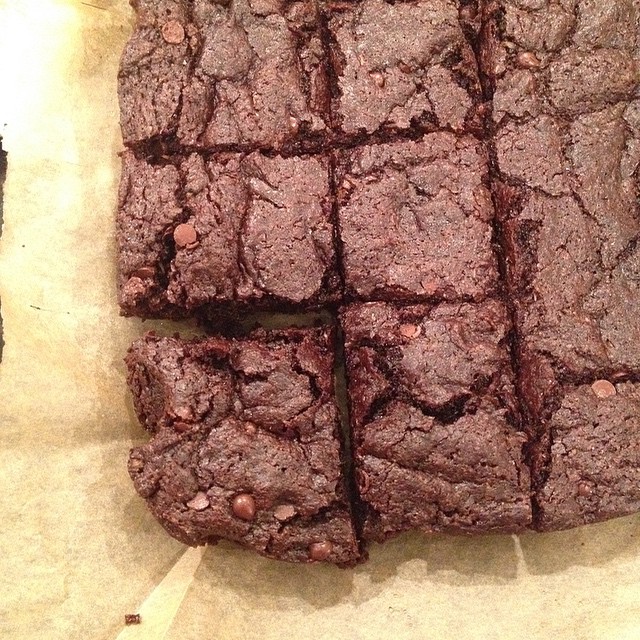 I let her make my Secret Brownie recipe the other day. She did about 95% of it herself which is not only a big deal for her but also a big deal for me. Its very hard for me to give control over to someone else in the kitchen! She did a great job on them. Can’t wait to bake with her some more!

Hope you are all safe and warm indoors today if you live in the path of this current snowstorm! I am still obsessively using my recipe for Soy-Lime Seitan Tacos. This time I made the soy-lime seitan adding peppers and mushrooms as sort of a fajita type dinner. Served them over toasted tortillas with some leftover Cashew-Lime Creme and lots of cilantro. We are not cilantro haters in this house. Served with a side of Rice and Beans and it was a perfect “new” meal for us. The kids even ate most parts of the meal. A few of us had a day off of work/school last week for Holiday that everyone seems to hate now a days. I was happy to just have my family together for an extra day. I made us some chocolate chip scones for breakfast. I completely screwed the recipe up but they were still edible and good. I can’t imagine how much better they would have been if I didn’t leave out certain ingredients! for the animals sanctuary

This weekend we visited a sanctuary in NJ called For The Animals. We met pigs, cows, chickens and goats that were once meant to be killed for food. The pig above loved laying in the sun having its belly rubbed by whoever. You could see the smile on her face. I love goats and when we all entered the field they were in and the sanctuary owner called out for them they all came running. It was one of the happiest things I ever saw. If you knelt down they would come over and rub against you like a cat. These are all smart smart animals who want to be loved just like all of us. I don’t know how people can eat them. The Cinnamon Snail is at the Red Bank, NJ, Farmers Market on Sundays. Its not possible for us to go down to them during the beach season because traffic home on a Sunday is horrendous! A 1 our trip can take over 2 hours! So since we were south of Red Bank on our vacation we traveled UP to Red Bank in the morning to hit up the Cinnamon Snail food truck. Most importantly it was without the kids! They stayed back at the beach house with my mother in law.

It was still breakfast time when we arrived but we both decided lunch would be for breakfast. Since breakfast for dinner is a thing then lunch for breakfast could be a thing…right? I ordered the 5-spice Lemongrass Seitan sandwich. It was amazing. Probably my new favorite sandwich from the truck. It is loaded with cashews. Cashews on a sandwich. Brilliant. I love cashews and this sandwich had a ton of them! Along with the load of cashews is also arugula, wasabi mayo and chili sauce. My husband ordered the Korean BBQ Seitan sandwich. I’ve had it before and it’s always delicious. It’s seitan with chili butter, kimchi and greens. You can’t beat that. I loved when Adams daughter asked if we would be needing a small or large box for the pastry’s. We went with a large box and ordered a few donuts, tarts and other sweets. Everything was amazing. I especially loved the S’Mores Donut and the turtle bar. This box of treats was very popular when we brought it back to the beach house. Across from The Cinnamon Snail is a truck called Freezy Freeze that makes Ice Cream per order with the help of SCIENCE!….A.K.A. Liquid Nitrogen. All flavors can be made vegan and they have quite the list of toppings. I have yet to try their Ice Cream since I’m alway’s there to load up my stomach with some Snail goodies. I did order their cold brewed coffee with coconut milk and it was a delightful iced coffee. I’ve promised myself I’ll order an ice cream while I’m waiting for my Snail order to be made. (I’ve waited 45 minutes once. Totally worth it though.) Remember when I was going to post about pumpkins all month a few months ago. Yeah that didn’t work out too well. I got sick of pumpkins really fast…then I got sick….then I hurt my back. Before all of that though…I GOT A JOB!

I haven’t worked at all in the last 5 years. I stopped 2 months before having my first child. Then I had a second one 1 1/2 years ago. The job came about suddenly and I wasn’t prepared for it at all but I think that’s the way it was suppose to be. Ever since graduating from Culinary School I’ve worked in restaurants and for caterers but what I really wanted to do was be a personal chef. Its not that easy to do though. It can be very hard to get clients so I kept sticking with my “9-5” restaurant/catering gigs.  A few months ago a friend recommended me to someone she knew and I’ve been working as a personal chef ever since! I’ve even managed to pick up a few more clients through the original client and have also catered a few party’s as well. The last 1/4 of 2012 has been pretty sweet. Here are two of the many meals I’ve prepared for my clients. A plus to this job is alway’s coming up with new ideas. I’ve become an even better cook the past few months and I’m grateful for that. A few Thursdays ago I attended a monthly supper club at the Whole Foods in West Orange, NJ with my friend Dianne. Each month is a different theme and the theme for August was VEGAN! I was so excited to be one of 10 people attending this dinner. When we sat down at the table they had the menu printed out on paper place mats. It looked like it would be a promising meal and it was! We started the meal off with a Roasted Tomato Salad. The salad was a mix of tomatoes, arugula, artichoke hearts and croutons. The tomatoes were ever so slightly roasted and they would burst in your mouth when eaten. The arugula was nice and peppery. The croutons were my favorite part of the whole salad because they were flavored with Meyer Lemon! My family often makes tomato and crouton salads during the summer months and I can’t wait to copy the Meyer Lemon taste of these croutons. I could have eaten this salad for every course! Along with the salad they served sliced bread with an olive oil and herbs to dip in and a bowl of roasted garlic to spread onto the bread. I saved my piece for the soup course! Next came out the Butternut Squash Soup. Its not exactly what I would put on a menu in August but it was delicious none the less. Perfectly creamy with a hint of ginger. I ate all of it. The main course was a single stuffed pepper. It really didn’t look like much of a main course to me but when we all cut into it the pepper was truly “stuffed”! There was an amazing amount of food in that pepper! Roasted vegetables like eggplant and zucchini along with forbidden rice were a perfect combination. When dessert rolled out I was so full of food already I didn’t think I could eat it. The chef came out with dessert and explained how it was filled with  cashew cream, nuts and dates. I was definitely going to eat this dessert after she said all of that!  It was wonderful! My pear was perfectly poached and the cashew cream filling was such a great idea. I ended up eating most of it and walked off the uncomfortableness afterwards around Whole Foods picking up a few things for my family.

We were told that they received such a positive response about holding a Vegan version of their monthly Supper Club that they hope to have others. I really hope they do.